Anaheim~The La Mirada High Boys Basketball team picked up where they left off last season by winning their first game of the 2015-16 campaign in a convincing 87-62 win over Paramount in pool play at the Canyon/Esperanza tip-off classic.

Serra transfer Ian Carter scored 12 points and Anthony Newman seven in the first quarter as the Matadores jumped out to a 27-15 lead.

Carter finished with 25 points total, Newman had 18 and Dylan Banks added 17 for the defending Suburban League and State Champions.

The Matadores (1-0) will take on Northwood tonight at 7:30 at Canyon High School.

Vittorio Reynoso-Avila, one of La Mirada's top seniors, and potential Princeton product, has been sidelined until January 6th with a broken metatarsal in his foot, his father told the La Mirada Blog.

120415 19:56 UPDATE: The Mats improved to 4-0 on the season by beating Canyon 70-54. Anthony Newman lead all scorers with with 26. Dirk Helaire at 14, Ian Carter 12 and freshman Bryce Craver had nine.They will play in the Canyon/Esperanza Tournament championship game after sweeping through the brackets, Saturday, December 5th at 7:00 p.m. vs. Long Beach Jordan at Canyon High School.

Matadores to Play La Serna at Home in CIF Finals

Los Angeles~The La Mirada High Football team will be heading to the CIF finals after beating Cathedral this past Friday night 38-7 in the southeast semifinal in Los Angeles.

Sei-J Lauago rushed for 188 yards on 24 carries and scored three touchdowns as the Matadores return to the finals for the first time since 2012.

A 79-60 victory over the Bethesda Flames at home got coach Holmquist to the big number as the 2015-16 Biola Eagles team improved to 9-1 to start the season.

“It feels great to have done this with so many people who have been here over the years,” said Holmquist. “I have so many good memories about so many former players and teams, and I feel very grateful that I was able to stay at one place for so long.”

Holmquist is in his 36th season at the helm of the Eagles and 39th season overall. He began his career in 1975-76 as he coached the first of his three years overseeing the Fresno Pacific Sunbirds.

The win even more firmly secures the coach’s place in history as he reaches a 900 win club that includes the likes of Mike Krzyzewski, Jim Boheim, Don Meyer and Bobby Knight.

The next illustrious head coach that Holmquist will pass on the all-time wins list is the legendary former Indiana Hoosier head coach, Knight. Three more victories this year would move Holmquist past Knight’s 902 and into seventh place all-time. Holmquist is already the winningest active coach in the National Association of Intercollegiate Athletics Division I, and he was inducted into the NAIA Hall of Fame in 2002.

“This is such a good place to work,” said Holmquist. “It’s a place where people want to help you. I’ve been blessed to work here at my school. I feel so fortunate to have the job I’ve had and coach the people I have. I just feel very blessed.”

La Mirada~The Rotary Club of La Mirada marked the Thanksgiving holiday by donating $1,100 in turkeys, canned goods and other food items to the Good Sam Pantry at Beatitudes Church in La Mirada.

The donation, which was funded in part by a grant from the Walmart Community Foundation, purchased complete holiday meals for 40 families.

Rotarians purchased the food at the Walmart Neighborhood Market, located at Imperial Highway and La Mirada Boulevard, on the morning of Thursday, Nov. 19. The food was then distributed to needy families that afternoon by volunteers at the Good Sam Pantry.

Rotary plans to donate a similar amount of meals for local families prior to the Christmas and Easter holidays.

The Rotary Club of La Mirada performs a variety of community service projects throughout the year.  The group meets on Wednesdays at 12:30 p.m. at the Elephant Bar Restaurant on Firestone Boulevard North in La Mirada.  Visitors are welcome to attend.

La Mirada Headed Back to Semifinal

Compton~La Mirada beat Dominguez last Friday night 55-13 in the CIF-SS Southeast Quarterfinal  and will advance to a semifinal for the first time since 2012.

The Matadores will travel to Cathedral High School in Los Angeles for the Friday contest after losing the coin flip conducted by CIF officials this past Saturday morning.

The game never seemed to be close after Sei-J Lauago ran back the opening kickoff 95 yards for a touchdown.

After taking a 31-7 at halftime, the Matadores held Dominguez at bay in the second half with a defense that continues to surge.

Tristan Meyer, the starting junior home-grown quarterback for the Mats completed 9 of 15 passes for 205 yards in his first taste of post-season football as the starter.

Dominguez had 250 rushing yards compared to La Mirada’s 136, but had only 31 total yards passing.

La Mirada Head Coach Mike Moschetti downplayed the significance of playing on the road this Friday, “We don’t care where we play.”

Including his first two seasons as co-coach with Ollie Lynch, Moschetti has reached the CIF playoffs all eight seasons as head coach of the Matadores and has captured the Suburban League title in six of those eight years including a CIF title in 2009 with Lynch.

Also, La Mirada now owns the state record for consecutive section playoff appearances at 36 after Long Beach Poly was declared ineligible following the forfeiture of games this season. The two teams had been tied since 1980.

Coach retires from La Mirada High after over 40 years of coaching locally; interviews for new coach begin next week

La Mirada~After 17 years as head coach of La Mirada High School Softball, Rich Trujillo has decided to “take a break,“ and will not return next season.

“It’s been a lot of fun and I’m glad to have been part of it. I appreciate the opportunity,” Trujillo told us via telephone,” whoever takes over I wish nothing but success and good luck and if there is anything I can do to help out I will.” 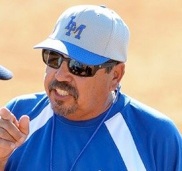 Co-Athletic Director at the school Jimmy Zurn told us the job for new head coach will be posted this week and interviews are scheduled to begin the week of August 3rd.

The school still lists Trujillo as the head coach on their website.

Trujillo said his phone has been busy, “I’m getting lots of calls from (former) players and their families.”

La Mirada won the Suburban League championship 13 of the 17 years with Trujillo at the helm.

La Mirada~Plans are in the works for the La Mirada Blog to begin a print edition of this website in 2016.

The Dallas Cup started in 1980 and is an invitation only tournament held Easter Week of every year featuring marquee teams and talented up-and-coming players from around the world, in seven age categories from U-13 to U-19.

The Matadores (31-5) seemed destined for a loss when they fell behind 50-38 in the third quarter, but they outscored their opponent 22-10 to send the game into overtime tied at 60.

The two teams tied each other in the first overtime and Kai Labasan hit the winning free throw in the second extra frame to secure the triumph.

The Matadores hit 14 three-point baskets in their victory and in winning the title set a school record with 31 wins.

Berkeley~The La Mirada High Boys Basketball team will attempt to capture their first state title in school history as they take on Archbishop Mitty of San Jose at the Haas Pavilion on the UC Berkeley campus beginning  at 4 p.m. Saturday.

The broadcast of the game, on DirectTV Channel 698, will be shown at Draft Picks Sports Grill and Tom's Tailgate in La Mirada.

Also, by watching the game at Draft Picks  and Tom's you can support La Mirada Basketball by just saying "Go Matadores" when you order and twenty percent of your bill will go back to the program.