The La Mirada Blog is very pleased to announce the addition of Brooklynn Ackerman to our team of contributors.

As the La Mirada Theatre for the Performing Arts celebrates its’ 40th anniversary this year, it kicks off the season with the lively, jazz musical Ain’t Misbehavin’, a tribute to the famous musician Thomas “Fats” Waller.

This rendition of the original Tony awarding-winning production in 1978, not only showcases Waller’s great musical talents, but his knack for entertaining the crowd with his great personality. 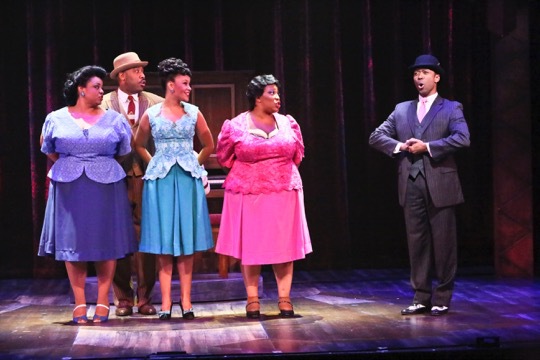 The cast, Frenchie Davis, Thomas Hobson, Boise Holmes, Natalie Wachen, and Amber Liekhus, flawlessly perform hits such as, “Ain’t Misbehavin’”, “The Joint is Jumping”, “Squeeze me”, “Honeysuckle Rose”, “Black and Blue” and what seemed to be the crowd’s favorite, “Your feet’s too big”.

From beginning to end, the cast captivates the audience with a combination of bold, entrancing vocal performances and comedic duets and interludes. Upon returning from a brief intermission, the audience is able to appreciate the music from the band before the show resumes.

Whether or not you are familiar with Waller’s music, or the swing-jazz era as a whole, this show is guaranteed to keep your feet tapping and shoulders swaying in your seats throughout its entirety. Together, the cast’s performance, stage set, and wardrobe bring the jazz era to life and leave the audience in awe.

This production will be at the La Mirada Theatre until October 8th, so don’t miss out on your chance to see this phenomenal show while you can!

Matadores storm back in comeback thriller